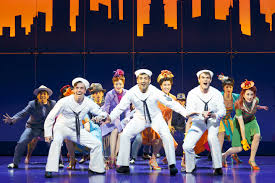 Let’s Go Out on the Town!

Several decades back, it was a bleak and dismal time for everyone due to the World War II. The dark cloud, which had settled over people, seemed to be at a standstill, as it continued to bring forth a plethora of grief, loss, and despair. It was during this time, when the original version of the musical called “On the Town” opened on Broadway.

Young and fresh…
“On the Town”, hosted by the Foxwoods Theatre in New York, has received praise for the music and lyrics. The scene when the three sailors – Gabey (Tony Yazbeck), Chip (Jay Armstrong Johnson) and Ozzie (Clyde Alves) – come down the gangplank of their ship, while singing “New York, New York”, is when the tones are particularly exuberant, which add flair to the dance moves. The story is about these sailors who want to make the most of their 24-hour shore leave by sightseeing to their hearts’ content in New York, and also having fun by spending time with girls. Their journey takes them to Brooklyn Navy Yard, Coney Island, Times Square, Carnegie Hall, and so on.

Ready for a soiree?
The romantic fantasy of these young men is particularly touching and poignant. The musical is not just about drama, as it involves comic elements as well. At the subway, Gabey is awe-struck by the beauty of this month’s Miss Turnstiles, Ivy Smith, played by Megan Fairchild. They split up and embark on a search for her, while visiting some of the most iconic landmarks in the Big Apple. At the Museum of Natural History, Ozzie catches the attention of the sex-crazed anthropologist Claire De Loone, played by Elizabeth Stanley and Chip finds a companion in a lady cab driver Hildy, played by Alysha Umphress.

Not always a happy ending…
The two couples go club hopping to experience the city’s nightlife. In a sad twist, Ivy is shown to be working as a cooch dancer in Coney Island to pay Maude P. Dilly, her mean and cruel singing teacher, played by Jackie Hoffman. Unfortunately, Gabey’s quest doesn’t end well, which is beautifully portrayed in the song called “Lonely Town” – his sole salvation is when he finds Ivy in his arms, and they dance together in a fantasy sequence. The musical paints a vivid picture in tje mind about romance being similar to a coin with one side containing happiness and other exuding sadness.

Although the performances are amazing,
the music is the real scene-stealer – don’t miss out;