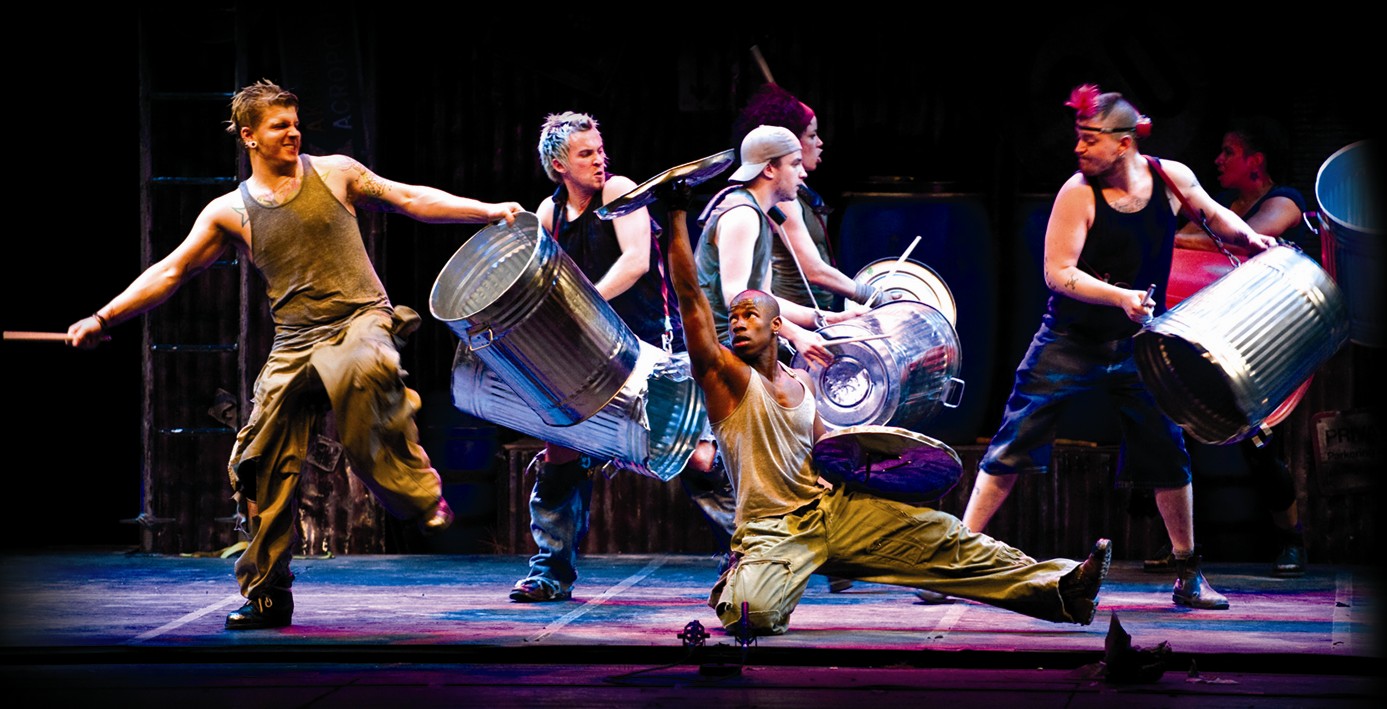 STOMP out a Tune!

The best part of STOMP is that it can be watched by all – kids, teens, adults, elderly people – there is some element that appeals to each age group. It doesn’t have words and the musical is ironically not structured on melody, but chooses to focus on rhythm instead. Irrespective of your taste in music, STOMP at the Orpheum Theatre, New York, shouldn’t be missed out!

How did STOMP originate?
The spectacle consists of an extraordinary amalgamation of percussion, movement and visual comedy, which dates back to Brighton, U.K. more than two decades ago in 1991. It was the brainchild of Steve McNicholas and Luke Creswell, who had begun to collaborate from 1981 as members of the street band Pookiesnackenburger and the theatre group, Cliff Hanger. When the band produced the famous “Bins” commercial for Heineken lager, which was a part of the band’s stage performance, it paved the way for STOMP’s dustbin dance in the climax.

Potpourri with personalities
STOMP features a group of individuals, each bringing something to the group with their unique, yet strong personality traits. They work as a team by utilizing simple building blocks to create a complex entity, which can be associated with everyone, and is identifiable by others at the same time. The crowd has their own quirks, eccentricities, competitiveness and differences like normal human beings, which in turn define the peculiar, yet intriguing dynamic between them.

What makes STOMP a must-watch?
It is an extremely enjoyable show, full of underlying wit and humor, which is why it has garnered glowing reviews and tremendous praise. The ensemble cast with 8 members use unusual objects they have found, to create captivating music and tongue-in-cheek humor. The items are diverse such as Zippo lighters, push brooms, wooden poles, hammer handles, garbage cans, inner tubes, matchboxes, kitchen sink, and so on. The blend of household and commercial objects to breathe character into music is an exceedingly brave attempt at a fresh idea that took off perfectly.

It is tough to pinpoint a single factor and say it its awesome or brilliant! In fact, the whole concept is a glaring example of genius – in some ways, STOMP was ahead of its time, even though it was and continues to be well-accepted and liked. The wordless factor also adds to its appeal, while the full houses are proof enough that STOMP has many years left to wow audiences and solidy their mark in the world of theatre.

GET YOUR TICKETS HERE

Awesome Things to Do in New York

Visiting New York is a dream for many, so if you are getting a chance, consider yourself among the lucky ones! Touted as one of the top cities for vacationing in the whole world, it certainly a golden opportunity if you get to come and experience what it has to offer. However, what make New York stand out are its amazing entertainment options.

This club has been in existence for the last 9 years and is the proud recipient of numerous of running tenant screening background checks during that time. Having a crystal clear sound system, you will find the place packed and hip-to-hip crowds on the sunken dance floor gyrating to the tunes belted out by top DJ’s that include NYC old-schoolers François K, Tedd Patterson and Louie Vega. Don’t be put off by the Heidi Montag wannabes hanging out in the neighborhood, Cielo is a must-visit!

Watch how twentieth-century history comes alive at this facility, which houses 30 restored aircraft, a submarine, and a British Airways Concorde Jet. This aircraft carrier has served in World War II, The Vietnam War, the Cold War’s anti-submarine patrols, and NASA recovery missions and is an excellent example of the conflicts that existed in the 20th century. Go exploring and check out the top-secret missile command center, torpedo rooms, the attack center, and the crew’s mess hall. There are simulators also with cutting edge technology that allows you to experience the thrill of flying a jet or journeying through outer space.

Pacha is a worldwide glam-club chain with outposts in nightlife capitals such as Ibiza, London and Buenos Aires. This club debuted in the US in 2005 with this posh joint, where the crowd is full of heavyweights ranging from local hero Danny Tenaglia to big-time visiting jocks of the big-room house and electro variety. Like most of the big clubs, do check the lineup before you enter.

New York City’s Theater District stretches from the 53rd to 42nd Streets in Manhattan between 6th and 8th Aves, called the Great White Way. Although, the area might appear to be congested, some of the world’s most famous and renowned productions are hosted in the 36 theaters here. You can’t experience New York’s fun factor without catching a Broadway show. Be it classic productions like “Chicago” at the Ambassador or a newer stage rendition of “Mary Poppins” at the New Amsterdam Theater, you must not miss out on the singing and dancing that this city has to offer.
Ready to have a gala time? Hurry and pack your bags!